Turn your device to have a better experience

Mark was thrilled to be able to spend some one-on-one time with his uncle. He built up a fantasy in his mind of what might come, unaware of the agenda that was already set out. The only thing he knew for sure was that they were going to be alone in a quiet little place; away from the trappings of technology and screens, sharing a bed!Arriving at the hotel, they followed the protocol and changed into their hotel attire. Uncle Adam removed his underwear in front of him, not unlike he'd done other times in gym showers. Only this time, he saw him sporting a full on erection!The man's cock was bigger and fuller than he imagined. It seemed to stick out like a tree limb from his body! Mark was only a couple feet away when this happened, unsure of what to do or say. His uncle didn't pause or panic, it was as if he wanted Mark to see it. Mark stayed silent, watching as it was covered by a jockstrap and a white robe.Mark changed afterward, anxiously removing his clothes. Suddenly, Uncle Adam reached a hand out to adjust him. He felt his uncle's fingers move his waistband, bringing it down lower, causing the pouch to shift the position of his cock and balls. It was the closest thing he'd ever felt to being touched by another man! Adam moved to his backside, shifting the straps so it perfectly cupped his butt. Mark thought he would pass out from the excitement.Mark wanted him more than ever! He couldn't wait to get into bed with him, feeling him closer than ever before. He was nervous, but he was so happy he was with him. He could sense that Uncle Adam wanted him, too. His heart raced as they finished changing, eager to see what their trip would yield!
View More
Twinks, Mature & Daddies
Tags: father and son, real dad son incest, dad fucks son, twink, virgin first time, creampie, gaycest
Click here to Close & Play Video 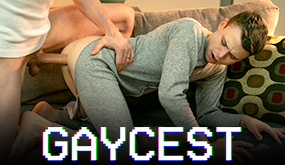